At the time, I wished someone would make a simple USB-controlled power switch, but I was too lazy to build it myself. Finally, 4 years later, something's available:

The software it comes with is crap, and it only runs on Windows. So I started up Windows XP in VMWare Player, and used the Linux usbmon facility to snoop the traffic.

I was able to figure out the USB control transfer messages needed to get/set the power state, and wrote this Python script to control it from the command line.

Finally, I connected the box to my TV, and set up an LIRC irexec config to run the script in toggle mode when I press "Power" on my remote. Now, I can still control my TV from the couch, but there's no power consumption in "off" mode (well, except for the server that's sending the USB commands, but I leave that running regardless.)

Theoretically, the box should pay for itself in under 2 years, since each watt costs about $1/year.

My main gripe with the 8800 is that it requires an active USB connection to keep the power relay turned on. So, there's no way to run the attached device while your computer's off.
Posted by Paul at 5:21 PM No comments:

I took this photo of one of the LTE demo netbooks in a Verizon store.  It looks like they're actually providing IPv6 access to customers now. 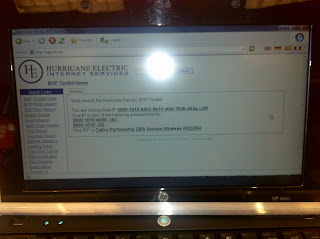 It was locked down in some sort of kiosk mode, so I couldn't run any traceroutes or anything.
Posted by Paul at 5:20 PM 1 comment: